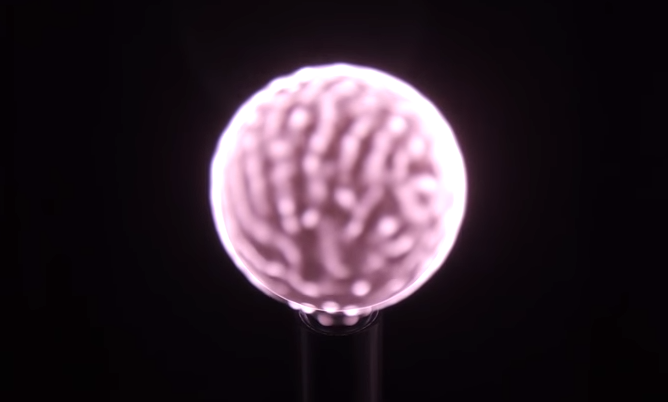 He summarizes the Electric Universe model in this way:

“SAFIRE is more like sailing, in that we are looking into the way that nature does things. We are not trying to force the plasma phenomena”

“We’re not trying to get the plasma to organize, but it likes to become organized under certain conditions.”

There is a video at point 24:30 where Childs shows the plasma. He says “it likes to form these tufts, we don’t understand them, but we’re looking at them, they become organized. Their fields are uniform and they like to be separated.”

“Some of the energy and the density that we have now are comparable to what we see in the sun, it’s pretty amazing.”

“This is controversial, I can’t really talk too much at this time yet, how we got this, but what I can say, if some of you are familiar with mass spectroscopy or digital gas analyzers, you’ll know what you’re looking at here; We started off with a chamber of pure hydrogen and we baked it out for a couple of days. Then what happened is, the chamber’s clean it’s purged, we put hydrogen in. Mass spec is saying you have pure hydrogen in the chamber, 100 per cent. We thought this is great . . . We introduced another gas, we got double layers formed. We let it sit in there and bake for a few hours, it was extremely stable . . . We added another gas, the moment the double layers disappeared and we got this [shows mass spectrometer reading] . . . Hydrogen dropped down from 100 per cent to 39 per cent and all these other elements formed.”

He mentions barium and titanium, they don’t know why they formed.

He then shows video of ‘double layers’ forming at about 27:30, then he shows how the energy suddenly concentrates. Slide states: “We were not trying to trap high energy photons and electrons comparable to the sun’s photosphere … but it does.”

Then he shows another video of something that he says has been patented: he states “This is a hollow anode, I will tell you that I’m actually putting deuterium and hydrogen as a mix through the core of the anode.”

“Some of you that are into cold fusion have a hard time getting atomic hydrogen. SAFIRE produces copius amounts of it”

“What we do is we put hydrogen into the hollow anode and we have a special material that the anode is made out of, it dissociates the H2 to H, and because it is positively charged we strip the electron and we actually have protons migrating from off the surface of the anode into the atmosphere”

He says there is no need for the magnetic fields to contain the plasma, it creates it’s own containment field, it wants to organize.

He says the SAFIRE plasma engine creates an environment to facilitate this self-organization.