According to the Nye County Sheriff’s Department in Nevada:

“Community Announcement — Long time resident, and radio show host, Art Bell died today at 72 years old in his home in Pahrump Nevada,” the Sheriff’s Department announced on Facebook. “With an estimated 10 million listeners, Bell’s show was at the time of his retirement the most listened-to late-night radio program, and fourth overall,”

Arthur Bell III was born in North Carolina in 1945. “By the age of 13, Art was an FCC licensed radio technician. A few years later, as a young airman, Bell and an equally foolhardy buddy built their own pirate radio station right on Amarillo Air Force base, secretly broadcasing Rock ‘n’ Roll to appreciative locals. 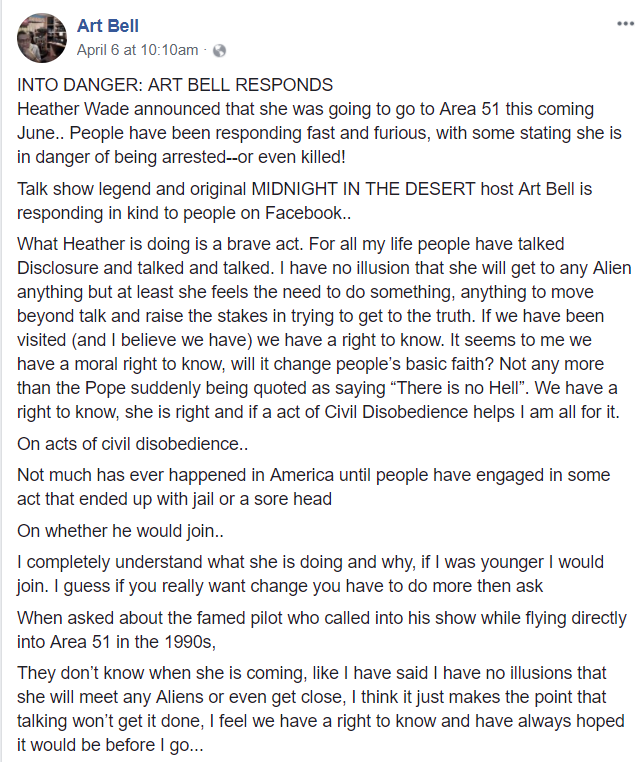 What a wonderful way to start the New Year with the Full Wolf Moon on January 1-2, 2018 in Cancer. So go ahead and Howl at the moon!

This is not just any Full Moon, but a Full Super Moon. In fact this Full Super Moon is going to be the closest one to us in 2018! Can you believe that? We are definitely going to have some strong energy on this night.

It is a New Year and time to set your intentions for this year by the light of the moon. For many people the Wolf Moon holds deep meaning and this is a good time to let your inner wolf howl!

The Full moon at the beginning of the New Year is about starting with an empty clean slate; it is the conception of an idea to become birthed into life. As it has been for thousands of years.

On the night of the full moon ask for a dream message on how to more fully step into your power before you go to sleep. Upon waking, write down what you remember of your dream, even if it is just one word. Meditate on it.

In North America, we often call this full moon the Wolf Moon, Snow Moon or Hunger Moon. Amid the zero cold and deep snows of midwinter, the wolf packs howled hungrily outside Native American villages. The wolves are out in this bright light this time of year, anxious and hot on a trail for a feast to shake their hunger in the lean winter month. The normally elusive wolves were once found all over Europe and the Native Americans living close to the land held them in high esteem, along with other animals they encountered.

Full moon always brings closures to bring to us a better tomorrow. The hills of the new, and new beginnings, will bring with them fundamental changes which have been dreaded for so long. These worries stem in the form of mysteries and it is these mysteries that have also held us back for so long. This full moon will emphasize how fluent we are to the emotions that are attached to our communication, how much we share, and how much we relate to others.

Full Moon phases herald a proper time for endings and closure. Full moon’s also signal an appropriate time to shine a light on or display works and deeds that were previously veiled during the new moon phase.

January’s moon can be bold and bright or covered in silky clouds. Like the wolf it can appear to be cunning. A symbolic lesson could be that progress is sometimes subtle and happens behind the scenes. Because wolves are also incredibly resourceful they can also symbolize our own hidden potential.

The Full moon at the beginning of the New Year is about starting with an empty clean slate; it is the conception of an idea to become birthed into life with the coming full moon. This is going to be a powerful year and there’s nothing better than starting the New Year with a full Moon.