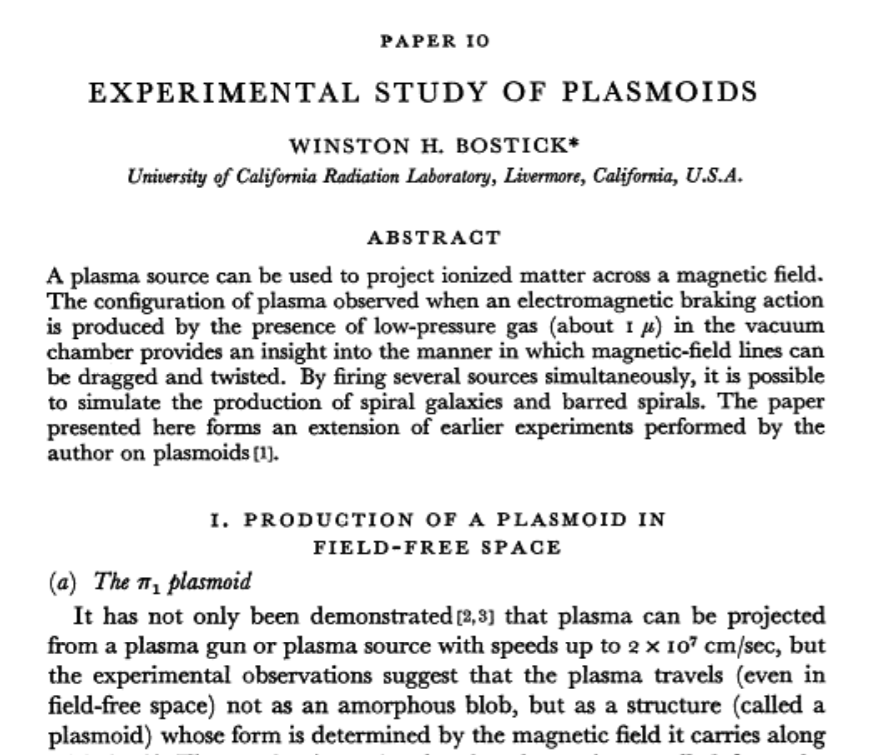 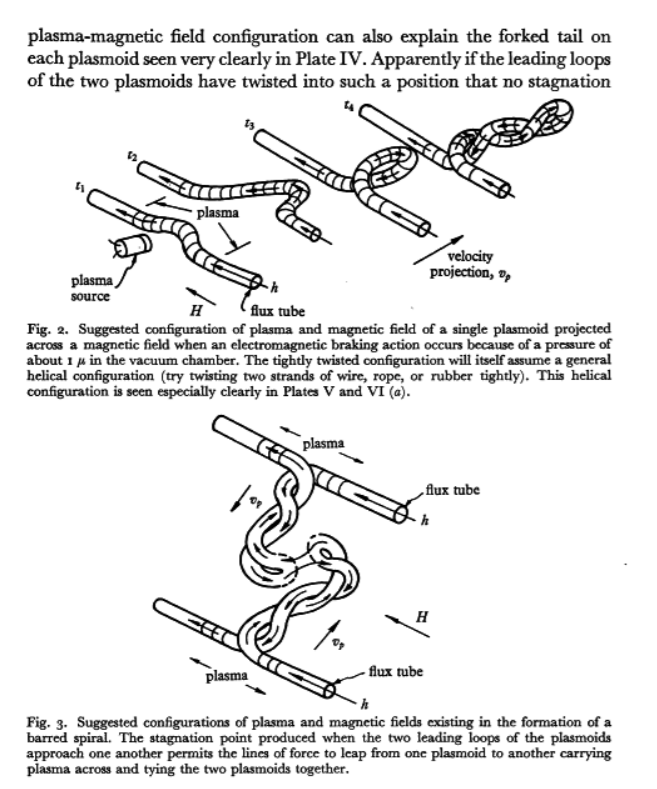 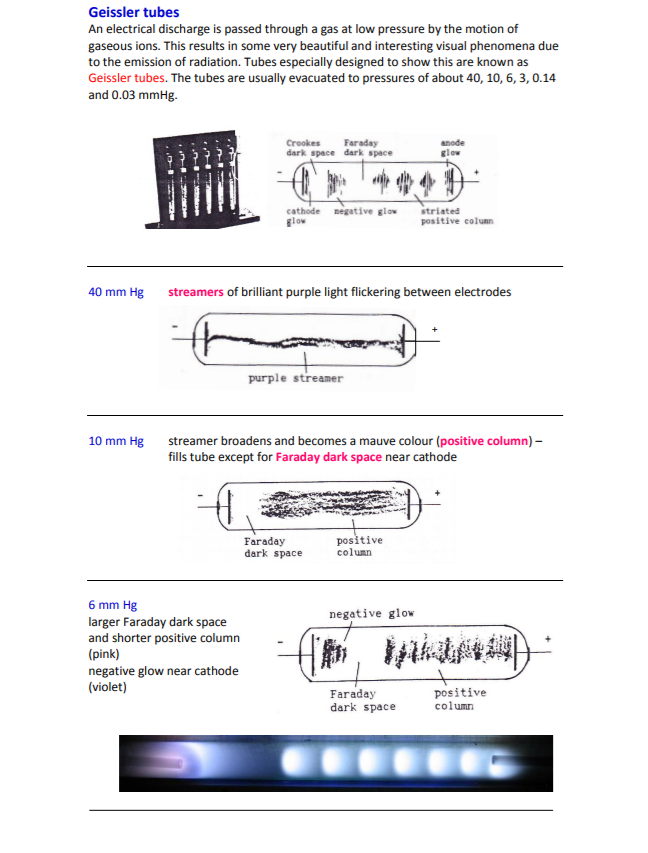 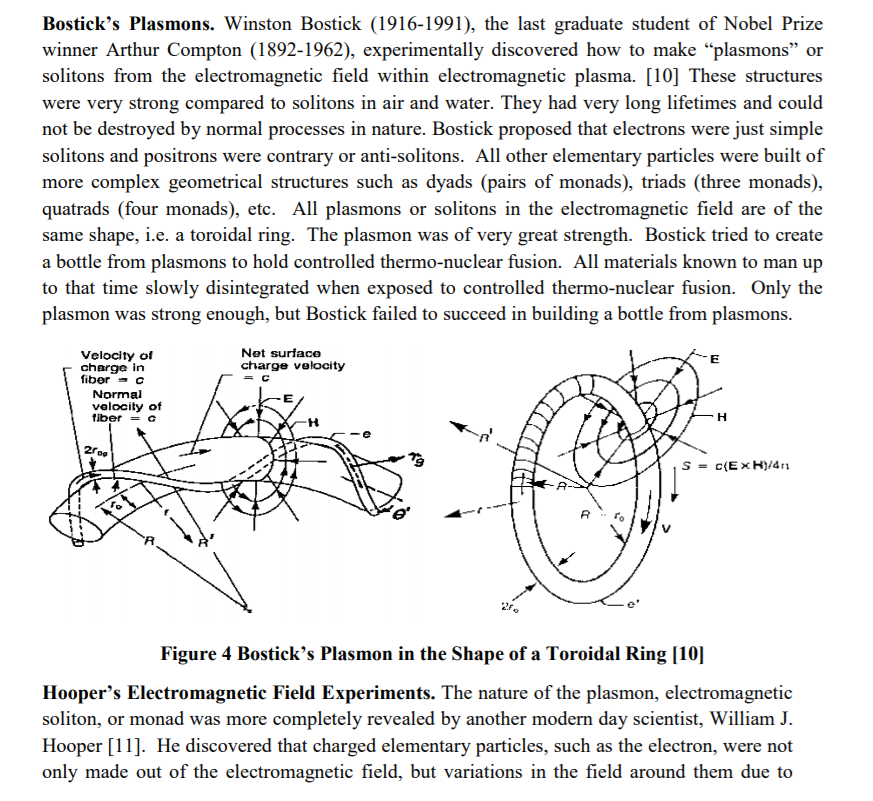 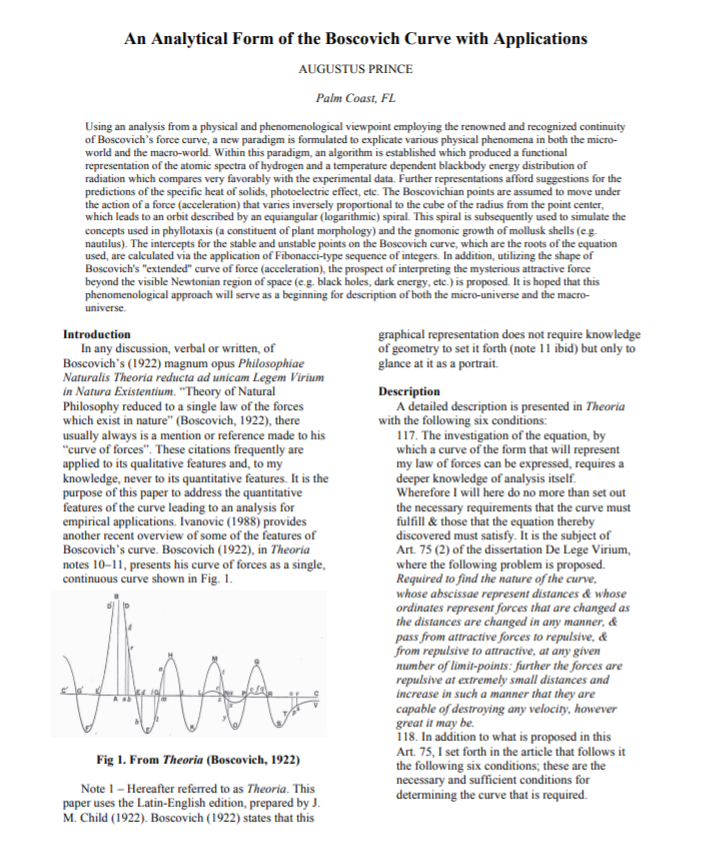 Plasmoids on the 100th Anniversary of Winston H. Bostick’s Birth

(L) Bostick speaking at a conference of the Schiller Institute (November 1984). © Stuart Lewis. (R) Adaptively smoothed, co-added image in the 0.4-2.5 keV bandpass of the Centaurus A jet. North is up and east is to the left. The unusual doughnut shape of the nucleus to the southwest is caused by pileup in the ACIS detector. Each of the knots previously detected by Einstein and ROSAT has been clearly resolved into several distinct subknots and enhancements embedded within diffuse extended emissions. Courtesy Kraft et al. (2002). [16: 59 Fig. 4]

Sixty years ago, Winston Harper Bostick found that an amorphous mass of high-velocity plasma has a natural ability to convert a large proportion of its kinetic energy into magnetic energy, contained in an organised toroidal structure.

He termed this structure a ‘plasmoid’. Bostick also showed that such magnetic plasma entities are capable of propagation across magnetic fields. Various strands of modern research support these findings. The characteristics of plasmoids become important for the study of plasma penetration of the earth’s magnetopause. And if the natural energy conversion mechanism exhibited by high-velocity plasmas can also be extended from laboratory scales to those of galactic jets, it may help to explain some puzzling aspects of the latter.

Bostick, dubbed “a man of great ‘physical intuition’”, was “a pioneer in particle physics, radar technology, fusion energy research, plasma and astrophysics” and “an innovative thinker and teacher who inspired many with his ability to give physical-geometrical descriptions to the abstract particles and forces that fill the theoretical world of physics and quantum mechanics” [1]. He was born on 5 March 1916 in Freeport, Illinois, and received his bachelor’s (1938) and doctoral degrees (1941) in physics from the University of Chicago around the time of the inception of the Manhattan Project to build an atomic bomb. Bostick’s thesis on the use of cosmic rays to generate subnuclear events for particle physics experiments was written under the direction of A. H. Compton and M. Schein. Following his graduate work, Bostick joined MIT’s Radiation Laboratory to develop new pulse transformers to generate the high voltages required by the new wartime radar systems.

After the war, Bostick continued to work at MIT on a new type of bubble chamber he had invented for particle physics measurements. He then worked with J. C. Slater on the MIT microwave linear accelerator until 1948. From 1948 to 1954, he was on the faculty of the Physics Department of Tufts University. He then took a leave of absence to work at Lawrence Livermore Laboratory on the early Controlled Thermonuclear Fusion Research (CTR) programme until 1956. In the mid-1950s, he developed a ‘plasma gun’ that accelerated bursts of atomic particles at high speeds through a magnetic field. From 1956 until 1986, Bostick was the George Meade Bond Professor at the Stevens Institute of Technology in Hoboken, New Jersey, serving as head of the Stevens Department of Physics for 12 of those years.

In the 1980s, Bostick’s work on superconductivity inspired the first of a series of seminars on physical and biological science sponsored by the Fusion Energy Foundation (FEF) and chaired by Lyndon H. La Rouche. The last such seminar was focused on developing the broader implications for the physical geometry of space-time conceived by Eugenio Beltrami, a collaborator of Riemann, whose work Bostick had first brought to the FEF’s attention in 1974. Bostick [2, 5] investigated Beltrami geometry as seen in force-free magnetic plasmas and suggested that this provided the context for realising force­free models for the atom and its nucleus. Bostick also championed the application of the same principles of Beltrami plasma processes to astrophysics. He died on 19 January 1991 after a long battle with cancer.

Going back to 1956, a milestone in plasma physics was reached when Bostick [3] reported experimental results which showed that plasma, when created and accelerated to high velocities by a button-type pulsed source, is shaped by its own magnetic field into a compact toroidal structure [3: 292]. Terming this structure a ‘plasmoid’, Bostick was careful to distinguish his own definition of a plasmoid as “a generic term for all plasma-magnetic entities”, highly structured, from its definition as an “amorphous blob”. He subsequently clarified his definition as “a self-generating, shaped body” [4: 90] and a “force-free minimum-free-energy structure” [5: 703] taking the form of a plasma vortex.

According to Bostick, “A rather surprising result occurs when the source … is placed in vacuum (~10-5 mm Hg) in an externally applied dc magnetic field and fired across the field. The plasma apparently has no difficulty in crossing the magnetic field” [3: 292]. It “forms an ever-elongating hollow cylinder as it proceeds across the magnetic field …” [4: 90] “Subsequent investigations were to prove that the plasma crosses the magnetic field in a train of paired oppositely rotating diamagnetic vortices” [5: 703], exhibiting Beltrami geometry.

These experiments led Bostick to conclude that “nature can take the electrical energy in the plasma gun, turn it into directed kinetic energy and momentum of the plasma, and then turn a large share of that energy into rotating energy of vortices …” [5: 703] The kinetic energy of a mass of plasma is converted into magnetic energy in a self-contained structure – a plasmoid – which then acquires the ability to cross magnetic fields.

Kubes et al. [6] recently demonstrated a similar conversion effect in a laboratory zpinch. The points of maximum pinch serve to accelerate plasma axially away from the zone of maximum compression. The high-velocity plasma then forms “toroidal, helical and plasmoidal structures … within the dense plasma column” [6: 1] in the lower-pressure regions further along the axis. A z-pinch is apparently an efficient way of generating the initial high velocities which result in the formation of self-contained plasmoids by the mechanism which Bostick identified.

Plasmoid formation is now thought to underlie various phenomena in interplanetary space. For example, Draper et al. [7] described how self-contained plasmoids arise during magnetic reconnection in the earth’s magnetotail. Similarly, Gunell and colleagues [8, 9] demonstrated that plasma with an initial high velocity relative to its surroundings may penetrate the sub-solar region of the magnetopause “by expulsion of the magnetic field from the structure …” [8: 1] We relate this finding to Bostick’s notion of an initial cylinder of high-velocity plasma transforming into a self-contained diamagnetic structure.

In the light of these discoveries, it is not inconceivable that humans may have witnessed the arrival and disintegration of large plasmoids from the sun into the upper atmosphere at times of solar-terrestrial crisis, when the strength of the earth’s magnetosphere may have been compromised and coronal mass ejections may have been more ‘geoeffective’. One such episode may have been the terminal stage of the last glacial period, when the earth is known to have experienced considerable geomagnetic instability and the essential themes of a global body of ‘creation myths’ seem to have emerged.

Meanwhile, extending the laboratory results to intergalactic scales may help to resolve some outstanding problems in the formation and spectral emissions from jets emitted by radio galaxies of Fanaroff-Riley type I (FR-I). Table I in the discussion of the properties of the X-ray jets in FR-I radio galaxies by Harwood & Hardcastle [13] indicates that the jets from many galaxies, including Centaurus A and Messier 87, contain small-scale features known as ‘knots’. There are a number of puzzling aspects of these knots and the spectral emissions from the jets.

Firstly, the origin of the knots in the jets is uncertain; see, e. g., [14, 15]. Kraft et al. [16] presented data from the Chandra mission which showed that the major knots in Centaurus A known from Einstein and ROSATobservations are in fact groups of smaller knots located at places of “shocks in the flow where the magnetic fields are compressed and the particles accelerated”. Apparently, these are aligned along a helical path within the main jet delineated by the diffuse X-ray and radio intensity contours.

We suggest that the knots may arise spontaneously from conversion of part of the kinetic energy of the main jet according to Bostick’s principles of plasmoid formation, reinforced by the work of Kubes et al. Alternatively, the trigger for the formation of a knot may be the development of a kink instability in the inner jet which leads to the pinching off of a self-contained entity – or plasmoid; see, e. g., [17: 204 Fig. 1] and [18: 1409 Fig. 5]. Within the small knots, the particles would necessarily still have high rotational velocities in order to conserve both the angular momentum present in the original helical jet [19] and the magnetic helicity [20], assuming that the field is frozen into the plasma in accordance with the usual magnetohydrodynamic assumptions. Therefore, the plasmoidal knots may mirror the well-known behaviour of spherical tokomak plasma confinement devices, in which high plasma temperatures are generated and particles occasionally escape from the confinement, thus allowing energy extraction from the devices.

Secondly, the amplification of the magnetic field necessary to explain the observed synchrotron radiation emanating from the knots requires an explanation. De Young [21] suggested a model of turbulent amplification driven by the kinetic energy of the jet. However, this mechanism requires c. 1,000,000 to 100,000,000 years to produce sufficient amplification of the field by equipartition with the kinetic energy in order to explain the radio lobe sources; presumably, an even longer period would be required in order to amplify the field to strengths necessary to explain the X-ray emissions. In contrast, formation of a plasmoid by the Bostick mechanism would also convert jet kinetic energy into magnetic energy in a knot, but can be expected to be almost instantaneous by comparison. The process of knot formation may also occur on scales below the observable resolution. Kraftet al. [16] suggested that this may explain the diffuse X-ray emission of the jet. We suggest that it may also help to account for the regular field structure on a scale of 1 kpc in the radio lobes [21].

Finally, second-order Fermi acceleration of particles to synchrotron-producing energies of ±10 to 100 TeV is assumed to occur at the turbulent boundary of the main jet [22 citing 21], or in multiple diffusions across shocks within the knots. Similar turbulent effects can be expected to occur at the boundary of a plasmoid forming a knot. Analogies with spheromak fusion devices suggest that highly energetic particles on field lines may also periodically escape from a plasmoid knot, thereby providing a direct source of high-energy particles without the need for Fermi acceleration in boundary turbulence or by repeated diffusion across shocks.

To summarise, in 1956 Bostick [3] discovered the natural ability of high-velocity plasma to convert kinetic energy into magnetic energy in a self-contained structure called a ‘plasmoid’, which allows the plasma to cross magnetic field lines. These and subsequent discoveries by Bostick have been shown to be relevant to present researches ranging from laboratory z-pinches to the solar system. Scaling up this behaviour to galactic dimensions may help to explain puzzling features in knotty jets emanating from FR-I galaxies, including the formation of knots, the localised amplification of the magnetic field and the acceleration of particles to TeV energies observed in galactic jets. The 100th anniversary of Bostick’s birth would provide an opportune moment to investigate these suggestions in greater detail.