The term dynamic symmetry was for the first time applied by the American architecture researcher J. Hambidge to a certain principle of proportioning in architecture . Later this term independently appeared in physics where it was introduced to describe physical processes that are characterized by invariants. Finally, in the given research the term dynamic symmetry is applied to regularity of natural form-shaping that in terms of origin also appears not to be connected with Hambidge’s idea, and, moreover, appearance of this term in physics. However, all the three variants are deeply interconnected in terms of their meaning which we are going to show.

At first, we point out strategic similarity of Hambidge’s and our researches. This is a well-known historical direction which in the field of architecture and art is motivated by the search for harmony regularities and, thus, is aimed at studying the objects of nature. Usually architects take interest in the structural regularities of natural form-shaping and, particularly, in the golden section and Fibonacci numbers which are regularities standing out by their intriguing role in architectural form-shaping. It is not accidentally that architects who do researches so frequently pay attention to botanical phenomenon phyllotaxis which is characterized by these regularities.

DYNAMIC SYMMETRY IN NATURE AND ARCHITECTURE 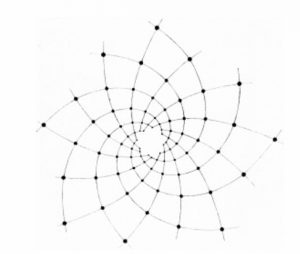