A team from Georgia Tech has just announced a world-first: a 3D-printed rectifying antenna the size of a playing card that can harvest electromagnetic energy from 5G signals and use it to power devices, turning 5G networks into wireless power grids.

Wireless communications put a lot of energy into the air, and over the years we’ve covered a number of efforts to harvest that energy. Short-range Wi-Fi signals have been the target of several projects, TV broadcasts and radio signals have been the focus of others. One device even hopes to increase the life of a smartphone’s battery by 30 percent just by harvesting some of the radio waves the phone itself is generating. 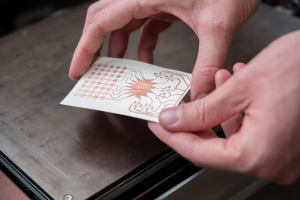 This inkjet-printed prototype of a mm-wave harvester allows devices to pull energy from 5G wireless communication systems out of the air and convert it into electricity
Christopher Moore, Georgia Tech

But 5G communications offer a whole new opportunity. “5G has been designed for blazing fast and low-latency communications,” reads the Georgia Tech team’s latest study, published in the peer-reviewed journal Scientific Reports. “To do so, mm-wave frequencies were adopted and allowed unprecedently high radiated power densities by the FCC. Unknowingly, the architects of 5G have, thereby, created a wireless power grid capable of powering devices at ranges far exceeding the capabilities of any existing technologies.”

Millimeter-wave energy harvesting has been possible for some time, says the team, but hasn’t been practical in many cases because long-range power harvesting tends to require large rectifying antennas, and the larger these rectennae get, the narrower their field of view becomes; you have to keep the rectenna pointed right at the wave energy source to make them work.

The team solved this issue using a component called a Rotman lens – the spiky-looking plate in the middle of the card. Rotman lenses are handy in a range of mm-wave applications as a beam-forming tool, effectively turning a single, large, high-gain, narrow-angle antenna beam into a series of simultaneous antenna beams covering a much wider angle. They allow radar systems, for example, to see targets in multiple directions without having to rotate or move the radar itself.

By adding a Rotman lens to their rectenna design, the team says it has now got a printable, bendable energy harvesting system that’s directionally agnostic, receiving power from any direction, and capable of pulling in 21 times as much power as “a referenced counterpart” offering the same angular coverage.