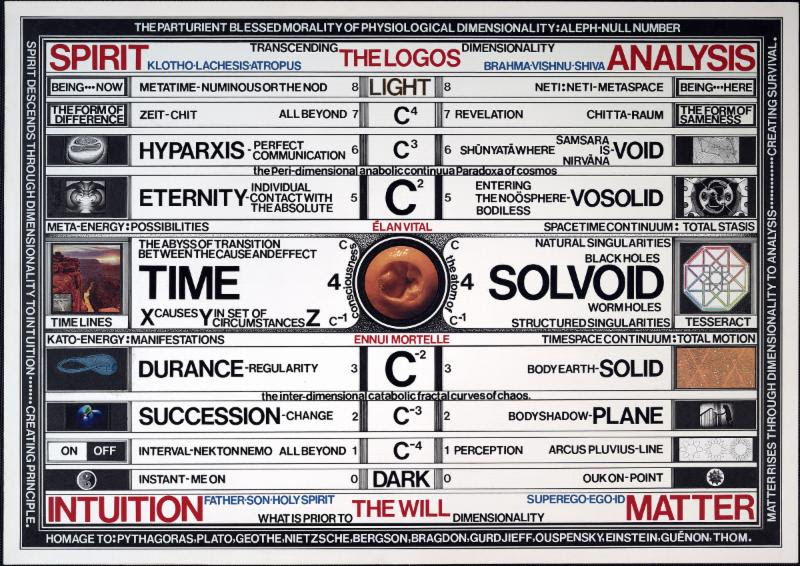 Kant’s deeper message – that of temporality – did not go unheeded by thinkers passing through the cultural glories of the fin-de-siècle. Three who developed notions of time as the source of higher or more evolved consciousness were Rudolf Steiner [1861-1925], George Gurdjieff [ -1946], and Peter D. Ouspensky [ – ]:

A) Steiner, a German philosopher who considered the poet Goethe his mentor even though there was 29 years between the death of Goethe and the birth of Steiner, initially argued for an organic view of the universe allowing for spiritual freedom. He entered the Theosophical Society but finally organized his own mystical group called Anthroposophy. He believed in higher dimensions of time, unlike Bergson who claimed the Élan Vital was God working through time and in the world. Steiner believed evolution was not inherent in the passage of time, but was an individual achievement that required spiritual training, which he called “The Cosmic Mission of Art”.

B) Gurdjieff, an itinerant teller of tall tales, whose territory was for the most past Western Europe and the Near East with the occasional forays into India. Some say he was a complete charlatan, but he did end his days under the protection of Oligvanna [the third wife of Frank Lloyd Wright] in 1946 at Taliesin West, Wright’s final studio in Arizona. He was able to convince Wright that he was abducted into a flying saucer earlier in 1946. His teachings about time centered about an energy organizing system called the Enneagram. It is a Pythagorean cycle of notes, which in reality is a spiral of fifths based on the classical diatonic scale with two half steps or shocks to human consciousness: do-re-mi [shock one: remember yourself] –fa-sol-la-si [shock two: do not identify with yourself] –do. What Gurdjieff presented is a method of transcending time by means of two natural singularities in time.