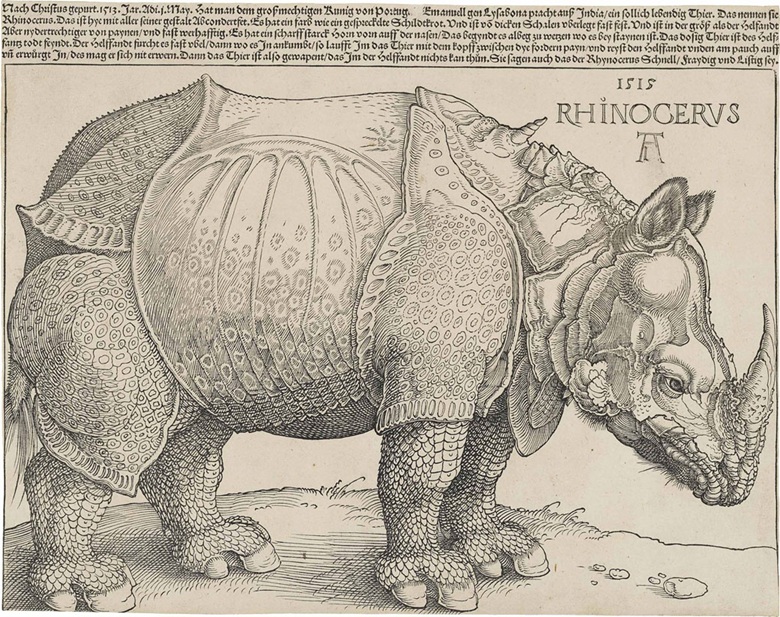 THE HISTORY OF THE DÜRER RHINOCEROS

Woodcut from around 1515, the Rhinoceros of Albrecht Dürer became a naturalist illustration icon, inspiring many artists until beginning of the twentieth century.

FROM GOA TO LISBON

In the heart of the sixteenth century, while trade and merchant ships master seas and oceans, it is extremely common to see these wedges filled with plants, spices and exotic animals to satisfy the curiosity of Europe. With its full facade on the Atlantic Ocean, the Portugal and its browsers children, Vasco da Gama in mind, bypass the Cape of Good Hope to set foot on the Indian sand in 1498. The exchanges between representatives of Portuguese monarchy and Indian sultans then become commonplace to resolve conflicts, seal agreements or flatter elites. Thus in January 1515, Alfonso de Albuquerque, governor of Portuguese India in Goa, is embarking towards Lisbon among ivory furniture and other prestigious gifts, a rhinoceros, royal gift of Muzaffar Shah II, Sultan of Cambay. May 20, 1515, the Nossa Senhora da Ajuda ship docked on the banks of Belém in Lisbon and the landing of the rhino undoubtedly made the biggest impression. No specimen of this kind had set foot in the old Europe for over twelve centuries and the time of the Roman games. In the royal menagerie of Manuel 1st, the perissodactyl attracts curious onlookers who come to look at the beast named Ulysse. The fame of the rhino is such that its coming even made a noise in the Spanish, French and Italian regions. Especially because of the excellent trade relations between Portuguese and Germans, a certain Albrecht Dürer, painter, got to know an animal that he will represent without having ever seen it.

Melancholia I is a large print full of complex symbolism. One of the four bodily humors in medieval thought, melancholy was associated with insanity as well as artistic prowess. In Dürer’s work on paper, instruments of geometry, an exacting branch of mathematics in which the artist excelled, surround a downtrodden winged personification of the humor, perhaps a visual reference by the master to his own inability to realize perfection in design. It’s likely that the “I” refers to the first of the three types of melancholia defined by the German humanist writer Cornelius Agrippa. In this type, Melencholia Imaginativa, which he held artists to be subject to, imagination predominates over mind or reason.