Professor Brian Josephson, Nobel Laureate, featured the CymaScope in his lecture at the Royal Society of Medicine 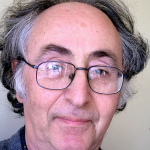