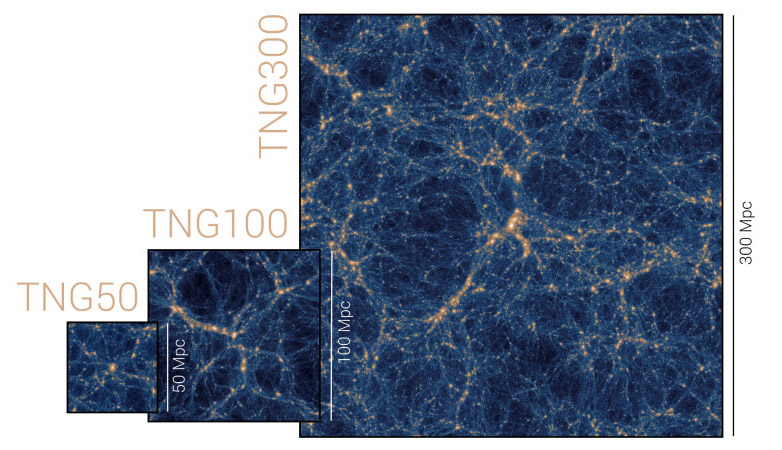 The IllustrisTNG project is a suite of state-of-the-art cosmological galaxy formation simulations. Each simulation in IllustrisTNG evolves a large swath of a mock Universe from soon after the Big-Bang until the present day while taking into account a wide range of physical processes that drive galaxy formation. The simulations can be used to study a broad range of topics surrounding how the Universe — and the galaxies within it — evolved over time.

The goals of constructing such a large and ambitious simulation suite are to shed light on the physical processes that drive galaxy formation, to understand when, why, and how galaxies are evolving into the structures that are observed in the night sky, and to make predictions for current and future observational programs to broaden and deepen our understanding of galaxy formation. These goals are achieved not in a single step, but rather through a series of extended analyses of the simulations, each targeting specific science questions. Some of the first questions that have been specifically addressed using the TNG suite are characterizing the stellar masses, colors, and sizes of galaxies, understanding the physical origin of the heavy element (metallcity) distribution in galaxies and galaxy clusters, drawing connections between the presence of dynamically important magnetic fields and the observed radio emission from galaxies, and the clustering signal of galaxies and matter on large scales. Subsequent studies are expected to canvass an even broader range of topics.

The core power of simulation suites — such as TNG — is that the depth of information on the simulation is much deeper than what is accessible observationally alone. For example, one of the most important features of simulations is their access to the time domain. While observations of galaxies can be carried out at different redshifts to give census data about galaxy populations at different stages of their evolution, the timescale over which galaxies evolve (millions, or even more, years) is simply far too long to follow directly observationally. Instead, in observations, bold assumptions are required to infer how census data at different observational epochs leads to a physical picture of galaxy evolution. In stark contrast, simulated galaxy populations in the TNG suite can be directly tracked in time so that an unambiguous and clear picture of their evolutionary history can be pieced together. This facilitates, e.g., clear predictions for the size evolution of galaxies, which would be difficult to directly obtain observationally. Using the simulation’s natural access to the time domain can help guide observational efforts for sussing out physical evolution trends within their multi-epoch observational data.

In addition to the time domain, the simulations also provide unambiguous predictions for physical quantities that might be difficult to derive observationally. For example, observational gas phase or stellar metallicity measurements are complicated derivative quantities that arise out of spectral energy distribution (SED) fitting, or line emission fitting. While significant effort has been put into refining these measurement procedures to the highest possible level of accuracy, significant systematic uncertainty still surrounds the observational measurement methods. In contrast, the TNG simulations make clear and direct predictions for these quantities.

The TNG simulations can therefore be used in concrete ways to build physical models of galaxy formation as well as to aid in the physical interpretation of observational data. The direct knowledge from the simulation can be used to detail the shape of galaxy stellar profiles, examine the color evolution of galaxies, or even characterize the evolution of the baryon acoustic oscillation signal in galaxy clustering data. The central goal of the TNG project is to create a broad tool that will generate further understanding of galaxy formation both through direct analysis of the simulation, as well as through increased understanding of observational data.

The emergence of cosmological hydrodynamical simulations as powerfully predictive theoretical models was embodied in recent projects (from 2013 – 2016) such as Illustris, EAGLE, Horizon-AGN, Magneticum, and MassiveBlack-II. In concert with other large-volume efforts these programs have convincingly demonstrated that hydrodynamical simulations of structure formation at kilo-parsec spatial resolution can reasonably reproduce the fundamental properties and scaling relations of observed galaxies.