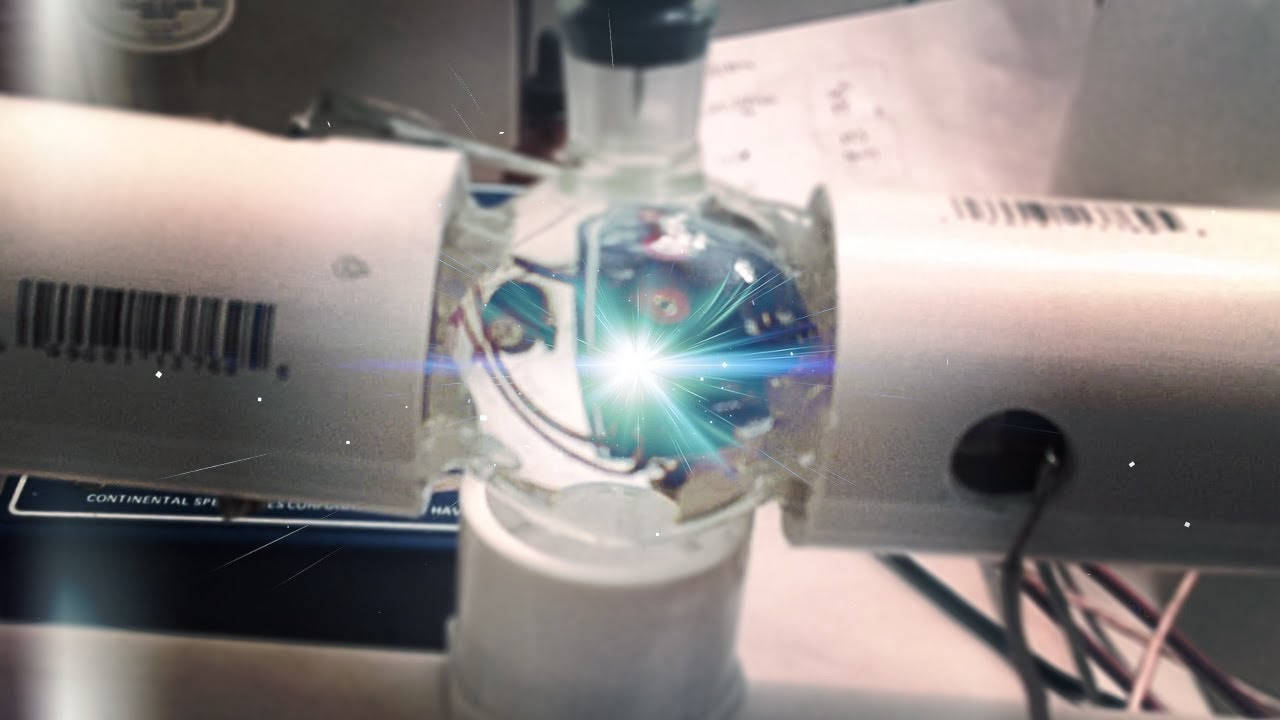 What if sound didn’t only flow through matter but could produce unexpected phenomena like light? Research in sound has revealed the capacity of sound to influence matter in a way that produces light. The phenomenon of sonoluminescence (SL) is one example of this relationship.

“If you want to find the secrets of the universe, think in terms of energy, frequency, and vibration.”
― Nikola Tesla

Sonoluminescence occurs when high-frequency sound vibrates tiny gas bubbles to reach star-like temperatures and emit flashes of light. The mechanism of sonoluminescence is not fully understood but its occurrence is well documented. As SL researchers probe deeper into the phenomenon, they have found that current fluid dynamic equations cannot explain why it happens. SL is a natural phenomenon as well, and marine biologists observe some species of shrimp using it as an attack against other creatures. It is the bridge between sound and light and can offer a deeper understanding of nature’s laws. 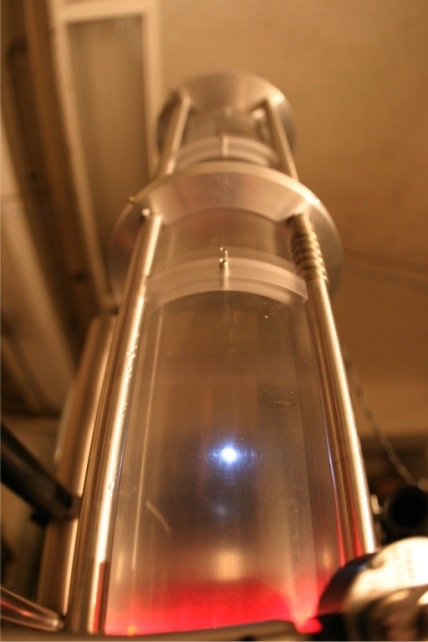 In a study at UCLA called Sonoluminescence: How Bubbles Turn Sound into Light, scientists S.J. Putterman and K.R. Weninger explore the mathematics and phenomenology of sonoluminescence. It is known that this phenomenon is caused by the rapid expansion and contraction of a bubble. This is known because the broad-band UV light emitted appears at a frequency, though not continuously. Think of a strobe light as an analogy where flashes of light last only pico-seconds (trillionths of a second.) According to Prof. Putterman, the phenomenon of sonoluminescence can heat bubbles up to tens of thousands of degrees. The surface of these bubbles burns at about 20,000 K (~35,000 °F) and look like “little stars.”

“Sonoluminescence, the transduction of sound into light, is a phenomenon that pushes fluid mechanics beyond its limit.”
~Drs. S. J. Putterman and K. R. Weninger
UCLA physics department

Sonoluminescence can be repeatedly produced in a controlled laboratory environment. Some of the key requirements are degassed water, a noble-gas mixture bubble, and a source of a high-frequency sound. Typically the sound is produced by a piezo-electric element. The scale of the experiment is typically small. Only about a cup-full of water is necessary, and the size of the bubble is typically only microns in size.

Sonoluminescence is in action below. It should be obvious why the phenomenon has gotten the nickname of “star in a jar.” The small cavitating bubble takes on the appearance of a small star. 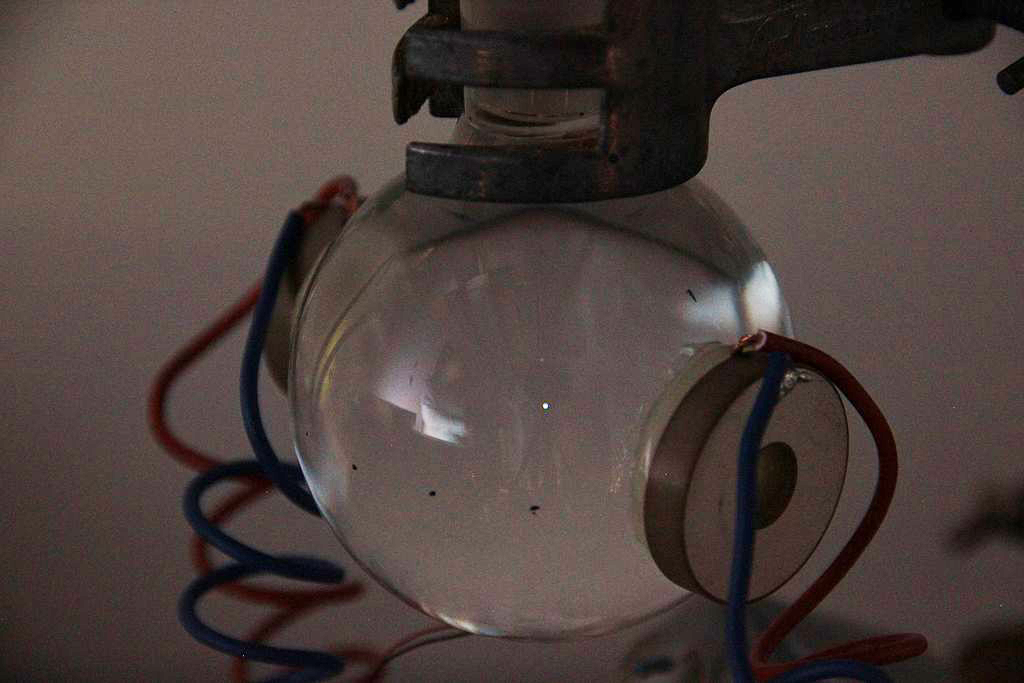 Sonoluminescence. In the center of the glass, a small blueish glowing bubble is visible. The frequency is about 25.7 kHz. The solution inside the glassware is partially degassed demi-water below room temperature. The glassware is handblown for an optimal spherical shape. This photo is taken in a darkened room with a camera exposure time of four seconds. Piezoelectric elements are glued to the glass with epoxy glue and the laboratory stand clamp has a cork lining inside.

Conventional fluid dynamic equations do not account for sonoluminescence entirely. Specifically, some researchers have applied Rayleigh’s equations to the bubble collapse but this “violates it’s domain of applicability” according to Putterman and Weninger. This violation occurs because Rayleigh’s equation is only for low Mach number motion, and the bubble collapse occurs at high Mach number. Putterman and Weninger also suggest that researchers misapply Saha’s equation and Bremsstrahlung equations to this phenomena. Without getting too deep into the details of these equations, Saha’s equation typically describes an ionization state of a gas relative to its temperature and pressure. Similarly, Bremsstrahlung equations typically describe electromagnetic radiation produced by the deceleration of a charged particle. At present, these equations do not adequately explain sonoluminescence for a variety of reasons.

Plasma is the fourth state of matter, commonly generated during lightning strikes. Research shows the inner core of sonoluminescent bubbles could be plasma.

Some researchers believe that during sonoluminescence, bubbles have an inner core of plasma. In a study published in peer-reviewed Journal Nature, entitled “Plasma formation and temperature measurement during single-bubble cavitation,” researchers state that “emitting species must originate from collisions with high-energy electrons, ions, or particles from a hot plasma core.” Other research supports the hypothesis that SL bubbles have a hot plasma core.

According to another recent publication called “Evidence for a Plasma Core during Multibubble Sonoluminescence in Sulfuric Acid”: “. . . the observation of molecular and atomic ions is the first experimental demonstration of an inner ionized plasma core during single-bubble cavitation.” Thus, current research suggests that the core of the SL bubbles may be plasma, the fourth fundamental state of matter. Perhaps this is the reason why fluid dynamic equations do not match the phenomenon.

Other Known Qualities of Sonoluminescent Bubbles

Researchers discovered that during sonoluminescence, a bubble rapidly expands then contracts in cavitation. Looking deeper into this, researchers have found that the bubble does operate within some conventional chemical laws. One of these is the fact that, as the bubble collapses, it rebounds because of Van Der Waals forces.

The accompanying graph depicts the collapse of a cavitating bubble over time. Notice that the bubble has a peak radius of about 5.3 micrometers. The bubble then rapidly collapses in about 20 nanoseconds. As the bubble “bottoms out” (approaches the van der Waals radius, rw ), it springs back and oscillates through several cycles of expansion and contraction.

Sonoluminescence appears to emit the most light with noble gases or noble gas mixtures. This is probably because of the inherent non-reactivity of the noble gas chemical group. Researchers use helium, neon, argon, and xenon to create SL. Star-in-a-jar researchers use oxygen and nitrogen mixed with a noble gas to create sonoluminescence in a laboratory. According to Putterman and Weninger, SL with only oxygen and nitrogen is difficult. A nitrogen and oxygen mixture produces a “dim light.” The article also states that noble gases concentrate in the bubble as cavitation occurs. This happens because the force of the bubble collapse causes reactive elements (H2O, N2, O2) to dissociate. Then, the surrounding water draws these gases into it.

An incredible example of sonoluminescence is the “stun” action of both the pistol and mantis shrimp. These predatory shrimp knock-out their prey by “loading” their claws with tension and releasing it suddenly. The shrimp clamps its claws shut at such an extreme velocity that the surrounding water vaporizes. As in the laboratory form of SL, this extreme cavitation produces the same light and extreme surface temperatures [3]. However, this light is not visible to the naked eye as in the laboratory experiment. The video below depicts this amazing process. Researchers Detlef Lohse, Barbara Schmitz, and Michel Versluis have named this “shrimpoluminescence.” An article published in Nature regarding the topic called “Snapping Shrimp Make Flashing Bubbles” states plainly that SL occurs at the snap.

A Bridge Between Sound and Light

It is not obvious why a bubble created by high-frequency sound contained in nothing more than a glass of water could reach temperatures close to the surface of the sun. Not surprisingly, researchers first looked at fluid dynamics to reach an explanation for sonoluminescence but found it lacking. Could plasma physics be the road by which an explanation will arrive? Would the Electric Universe model explain what is happening? As more research unfolds, a deeper understanding of the nature of this bridge between sound and light could lead both to greater scientific understanding and practical applications. 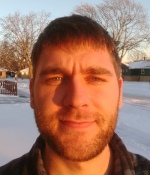 A native Wisconsinite, Jimmy Mikecz researches, blogs, and conducts independent research on a variety of topics. These include history, engineering, web development, comparative religion, psychology, agriculture, philosophy, and many other topics. He has a B.S. in Environmental Science from University of Wisconsin – Madison. Jimmy hosts his own website: https://jwolfgang.info

The ideas expressed in Thunderblogs do not necessarily express the views of T-Bolts Group Inc or The Thunderbolts ProjectTM. Edited by Susan Schirott.